Low flow and low pressure. What is wrong?

Low flow and low pressure. What is wrong?


I was away for 2-3 months and nobody took care of the pool. In fact, the pump was simply left on 24/7. No salt was added. Rain came.Eventually, the salt water chlorinator turned off the pump due to low flow.


The bottom of the pool had some nice green/brown slimy areas.


There was clearly no salt in the water.


Anyway, I have shocked the pool and killed everything that was in there. I restored the salt level. The pool looked good except for a small amount of the green/brown slime, which I thought I could simply vacuum up.


Build up to the problem:


I backflushed the sand filter because I had no idea when the last time it had been done. It seemed to work normally in that I got a decent flow out of the waste pipe and the dirty water eventually cleared. I then tried to vacuum. I'm not sure it was working very well at the beginning, but for sure after about 15 minutes the suction seemed to quit. I stopped and cleaned out the cyclone filter at the ingress to the pump. The problem remained. I tried to backflush the sand filter again. I can only get a trickle of water to come out the waste pipe, despite the fact that the filter is below the level of the pool, and gravity alone should be pushing water through it.


Then I tried to put it back into filter mode, and I had absolutely no pressure on the sand filter at all. Unless I closed the return valve to the pool, in which case the pressure would build (so not a gauge problem). I thought I must have channeling in the sand filter, so I opened it up and mixed up the sand. Yes, the sand was very slimy on the top, but nothing extreme and no obvious channels.


I put everything back together and turned on the filter. Only a marginal improvement.


Now I have a few PSI on the sand filter, but still very low volume.


I have redundant pumps on this pool, and I switched pumps. There is no difference, so I don't believe the pump is the problem. I tried all 3 water sources from the pool (It is an overflow design). Vacuum port, overflow tank, and main drain. All of them give low flow, so I don't think it is a blockage in the system, unless it is in a very short section of PVC that is common to all 3 right before the water enters the pump. But I discount that possibility because if it was a blocked pipe before the pump, then the water level in the pump should fall as it is starved for water (unless the seal is so good that it can't suck air in at all...but that would be an incredibly good seal). That doesn't seem to happen. The cyclone filter before the pump impeller has a clear lid which clearly shows the water level is full.


So I'm left with a conundrum. I believe there is no issue with air or blockages from any of the pool drains up to and including the pump, and I believe there are no issues with the pump itself. But I still clearly have very low pressure on the filter, combined with very low water volume.


What else could be wrong?


The only thing I can think of is that maybe the multi port valve is clogged somehow? Does this sound reasonable? I am a bit hesitant to try and take this apart if I don't have to, because I have a great talent for taking things apart and then being unable to reassemble them.


Can anyone else think of something that might be causing the problem. I have attached a marked up graphic of the filter setup. Remember, this is all below the level of the pool, so there is positive water pressure at the ingress to the pump.


Summary of the facts:

What else can cause simultaneous low pressure and low volume?

Any suggestions appreciated. My children will thank you if you can help me get this working. 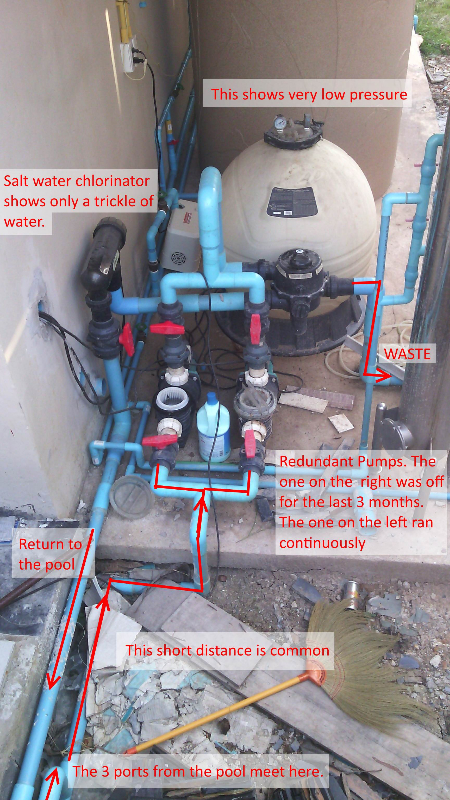 Can you disconnect the pump from the output side and run it to see if the flow increases
Being as it's at a lower level than the pool you could remove the pumps and open the valves to see what flow is there
If the flow is poor then there would be a blockage in the short common pipe. You would require something to blow back the lines separately using a blower that is used to blow out lines when wintering
Top

Did you ever get this resolved? I have a similar problem.
Top

damart299 wrote:Did you ever get this resolved? I have a similar problem.

This post is quiet old with no response from the poster, which is sad as you have a similar problem and a reply could have helped you
Please post your own problem as no to situations are exactly the same
What have you tried?
Top
4 posts • Page 1 of 1