Sorry for the long story to get to my problem, i just want to make sure you have all the information.

I have a 13,800 gallon pool with a 5 port Caretaker 99 pool valve and a Pentair CCP420 filter and 1 1/2 horsepower motor. Before the caretaker valve i had an A&A valve system. The A&A valve wasn't working and two of the rubber pieces from the pistons tore off and got sucked into the system. After i replaced the valve, i wasn't getting any suction and the pop up heads weren't coming up. I opened the caretaker valve and removed the pistons and gears to force water through. This started to get the water moving and i finally got suction back and i was able to clear the green water up.

I still seem to have a clogged line as i put a canvas hydra flush down each of the ports. It seems like water was going through all the pipes except one, it wouldn't allow the hydra flush to stay it, it would force it out. So i think i identified the blocked pipe, now figuring out how to unblock it is one issue.

So one of my issues is trying to get one of the lines unclogged. Is there any other way to try to clear the line if the hydra flush isn't working.

My other issue, when i vacuum, it seems to be picking the dirt and debris up, but when i remove the hose, it seems like there is suction but not much because all the leaves on the surface wont move towards the skimmer basket. I'm always having to skim the pool everyday. What would be causing the skimmer to not have a lot of suction? I made sure there are no leaks and i cleaned the filter cartridges several times.

I've attached a picture of my pool setup. 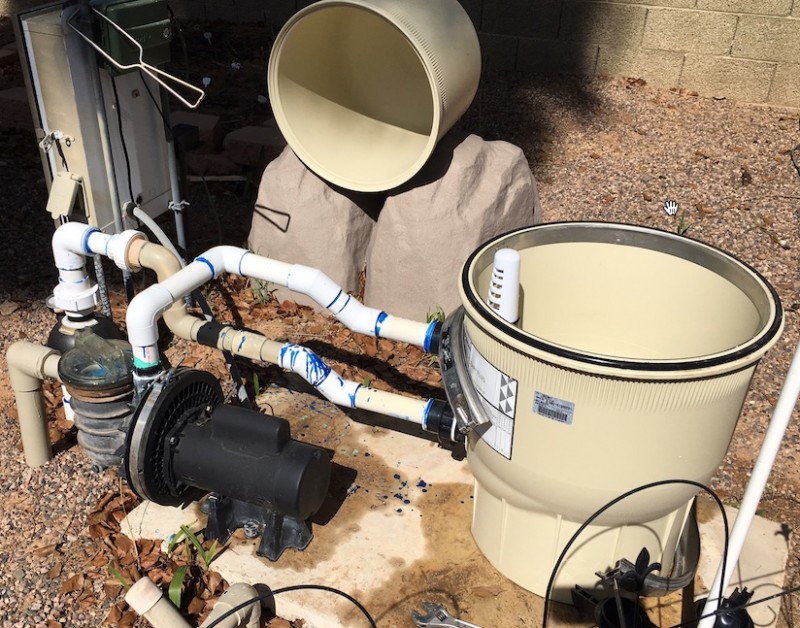